I don’t often make desserts. Mostly because my husband isn’t a “dessert person” (I am) and won’t eat more than a little (I will) and well… you can see where this is going (mostly to the butt/hip/thigh region). So when someone has a party and I have the opportunity to bring something, I try to break out one of the hundred thousand dessert recipes that I have saved. Such was the case when I stopped by a house-warming. However, since I didn’t have a whole lot of time, I chose a ridiculously easy recipe that i found on a blog called Espresso and Cream. Seriously, you can make this with one hand tied behind your back (although that may get a bit messy). And it tastes pretty good. At least the empty pie tin at the end of the night seemed to think so. 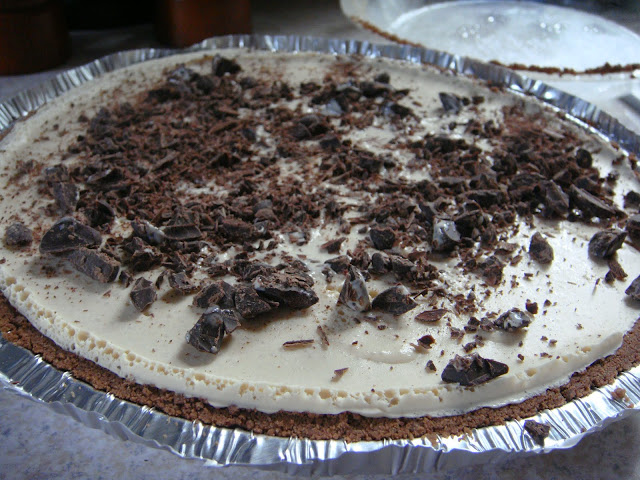 So I ended up getting the chocolate graham cracker crust, which didn’t come in the biggest size (leaving me with some extra filling), but I think that the chocolate worked really well so I’d recommend that. When you get home from the grocery store, put the ice cream in the fridge (not freezer) and the cream cheese on the counter. When the cream cheese is soft enough, the ice cream will be as well. First you want to beat the cream cheese alone until it’s smooth (no chunks in the pie). Add in the powdered sugar, vanilla and milk and beat, then mix in the ice cream until everything is well combined. Then pour it into the crust and freeze for a few hours. If you want, you can melt chocolate chips and drizzle on top, or I just chopped up some chips and sprinkled them on top. For an extra coffee burst you could also chop up some chocolate covered espresso beans. See—so easy and tasty too. It makes a perfect summer dessert to take to a party, or when you have people over. Just don’t leave yourself alone with it too long (I warned you).

(Click here for printable recipe)
Posted by Wormfood33 at 6:16 AM