We had a smaller than normal group for this competition: just five of us were able to make it. At first, we were a little disappointed since potato is such a fantastic ingredient. But it turned out to be a blessing in disguise because by the end of the night we were all incredibly full and starched out. I think the turkey has been getting a bad rap as the cause of post-Thanksgiving lethargy, because after this competition, I'm pretty sure potatoes play a devious role in that. The good news is that basically everything was delicious. We had a really hard time judging and I'm sure the scores were all really close.

I had the first dish of the night and the only appetizer. I made a "potaffle" which is essentially a potato pancake but made on a waffle iron. And I topped it with a Dill Jalapeno Sour Cream. My relationship with the waffle iron was sorely tested while making this dish, but it must have turned out all right because everyone wanted seconds and it earned me the runner's up prize! 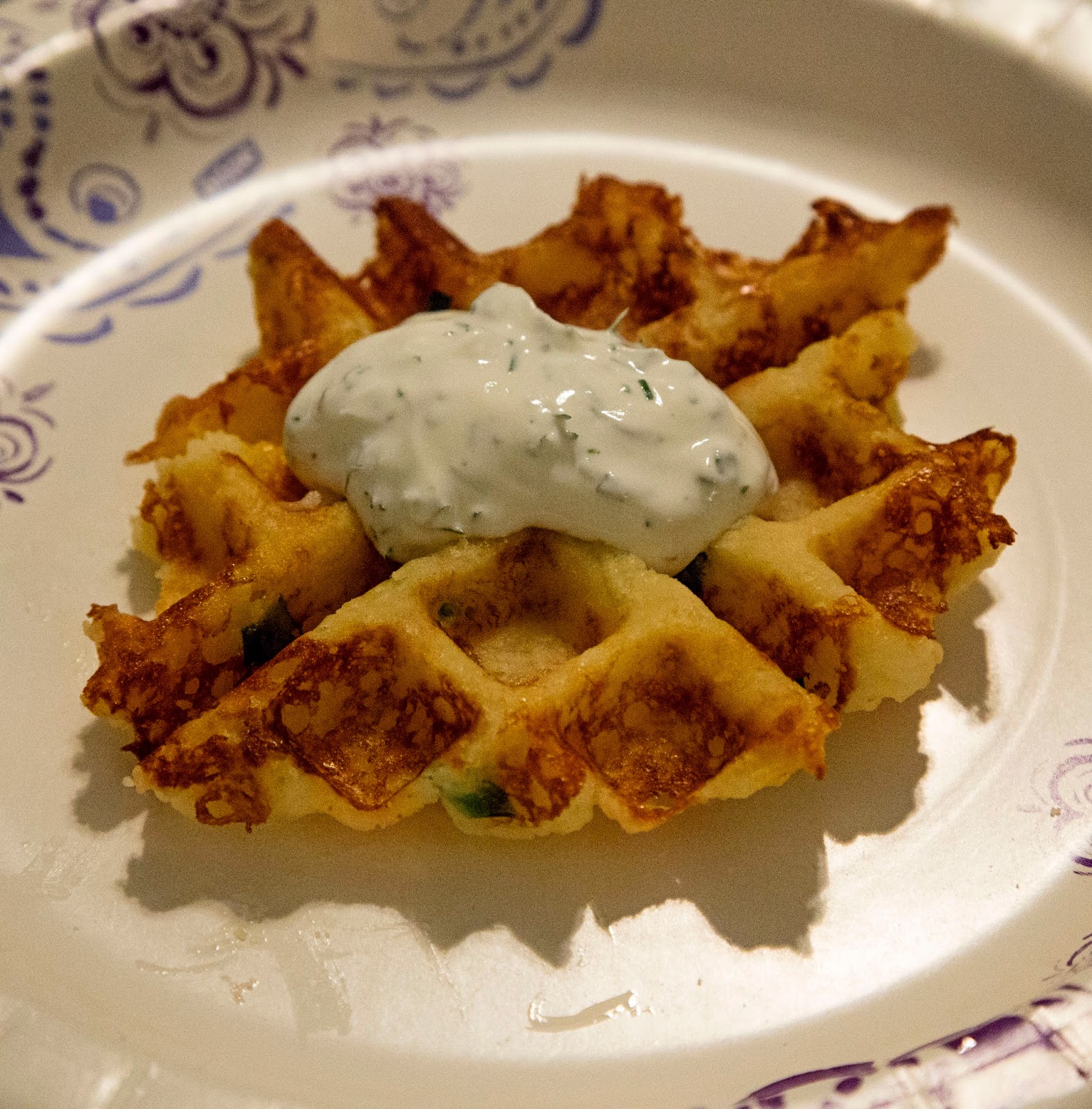 Next we went right into the mains, starting with Emily's Baked Potato Soup. Potato soup is probably my favorite soup of all time, and Emily's recipe was very, very good. Nice and creamy, seasoned perfectly, with crumbled bacon and cheese. You can't go wrong there. It would be perfect for filling and warming your belly on a cool fall night. 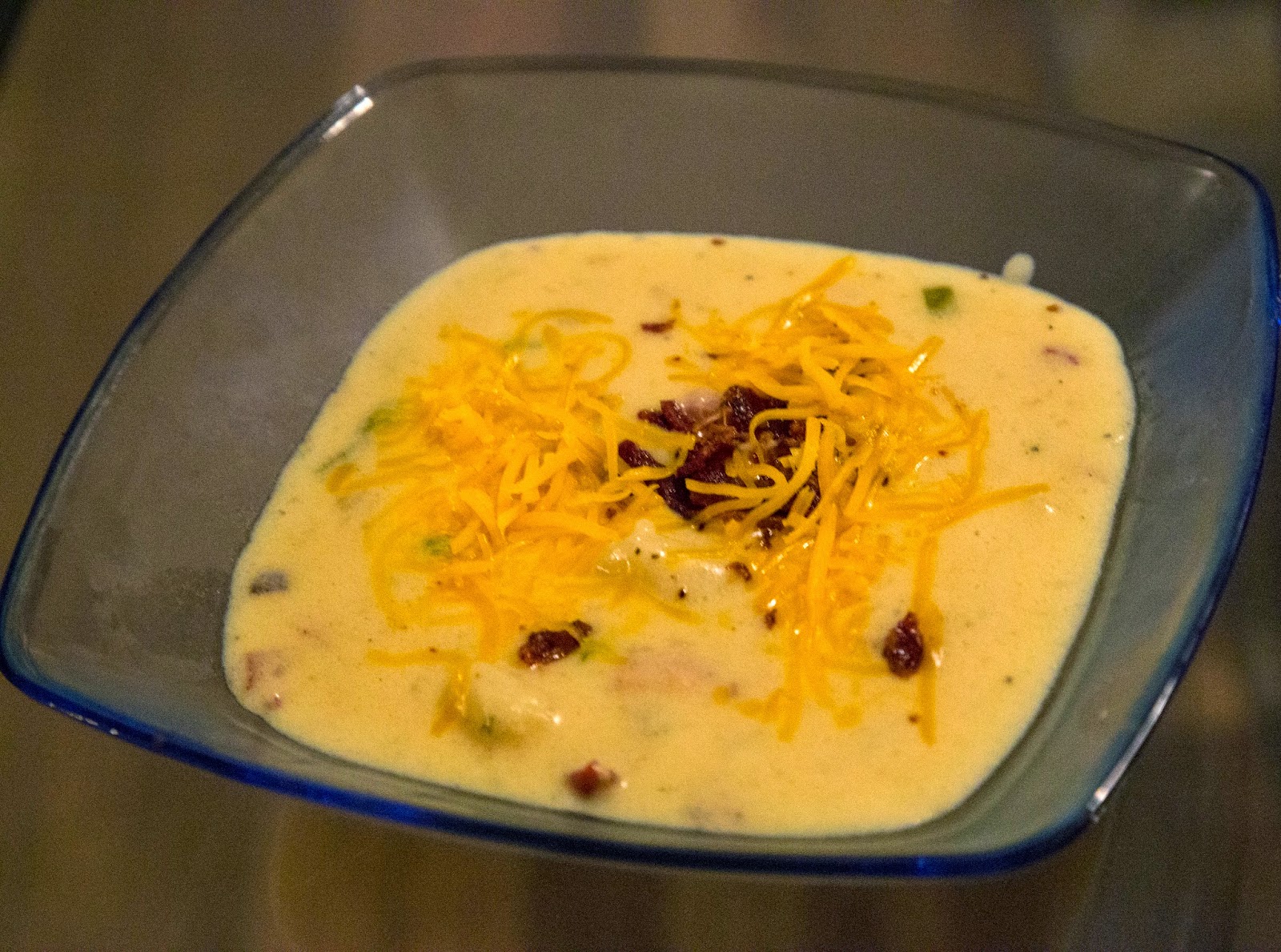 Chelyen had the other main and her entry was extremely creative as well as yummy: Loaded Baked Potato Empanadas with an Sour Cream & Onion dip. It had a great crispy crust on the outside, then inside you could see plenty of delicious bacon, cheese and potato. I loved the dip as well, which she made with carmelized onions. She definitely got major points for inventiveness and also for having the guts to tackle something as complicated as empanadas. 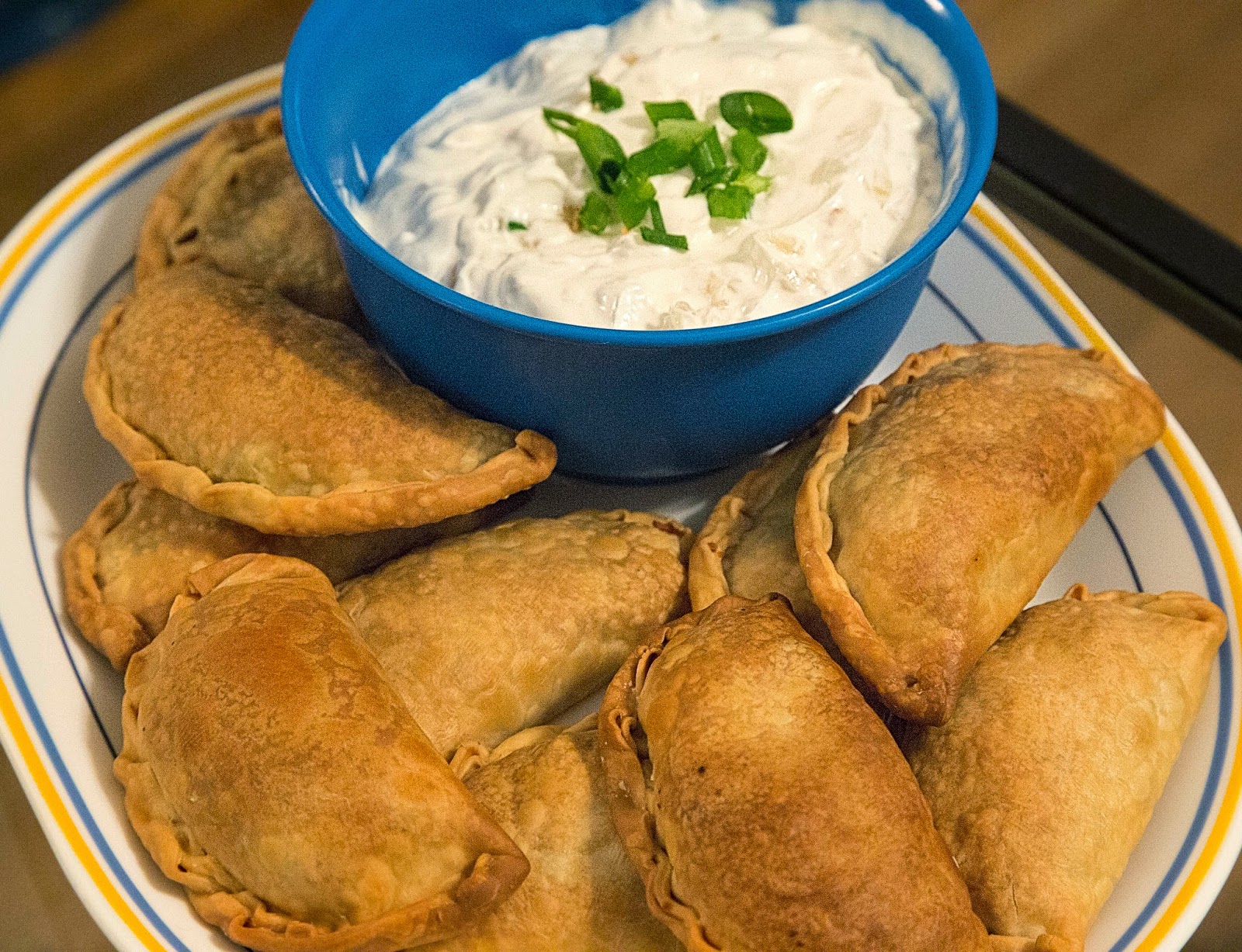 So, then we had Kim's side. Poor Kim. She made Scalloped Potatoes with Spinach that looked beautiful as it came out of the oven. It also had a ton of great flavor-- I particularly enjoyed the spinach with the creamy sauce. The problem was that her potatoes didn't get cooked all the way. Even after she put them back in the oven for round two, they were just too darn stubborn. But we all agreed the flavor was there, so it's a shame that it didn't quite turn out. 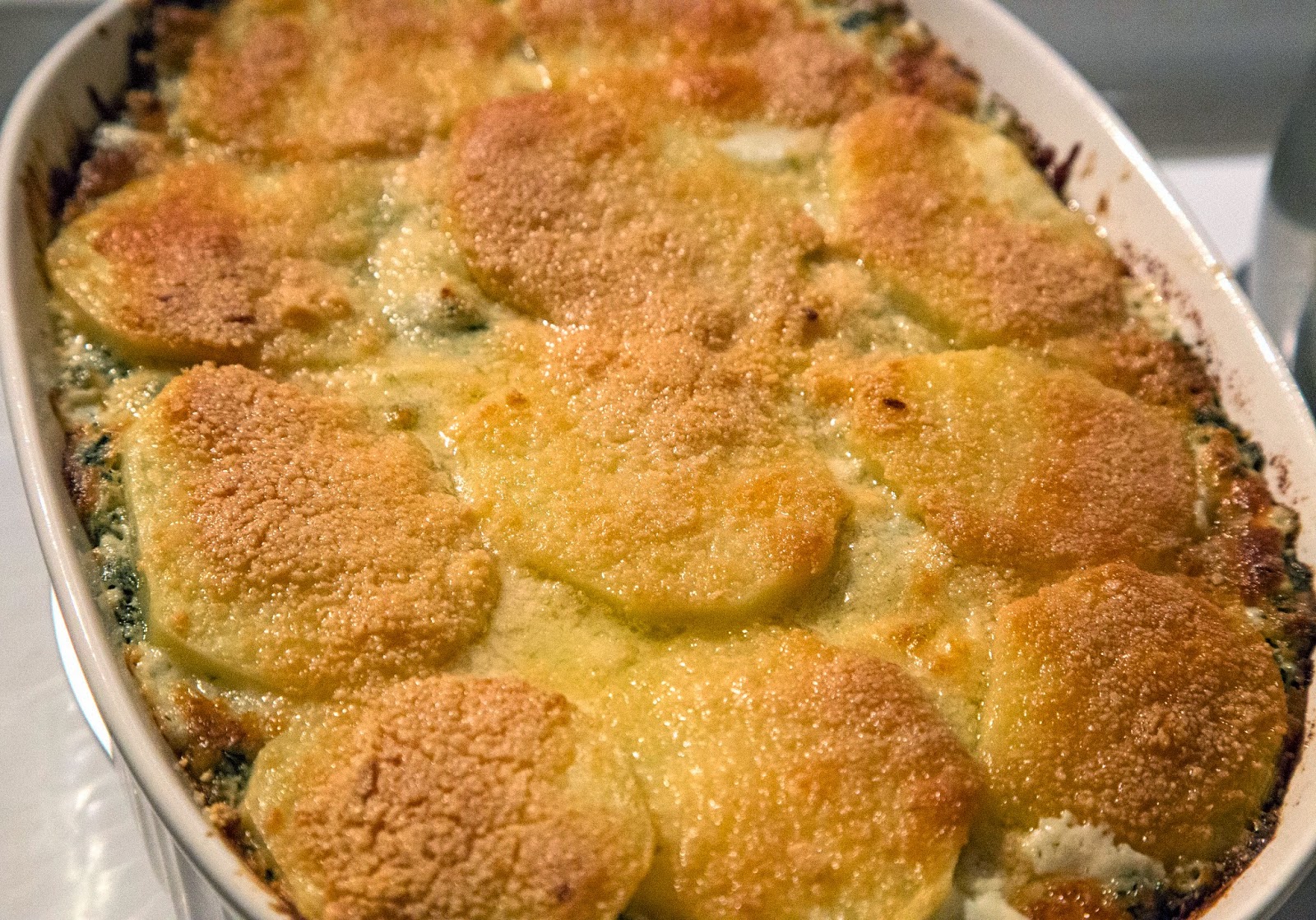 Finally, the Iron Chef Potato winner! Doan decided to do a dessert when no one else had signed up for one, and it's a good thing she did. Her Sweet Potato S'Mores Cheesecake was to die for. In fact, by this point we were all so full, and the dessert was still so amazing, that we almost died eating it. Ok, not quite. If you don't have a Thanksgiving dessert planned yet, you should make this. It was seriously good and extremely impressive! Congrats on another win, Doan. Someone's got to stop her winning streak. We'll give it a shot at our next competition in 2015! 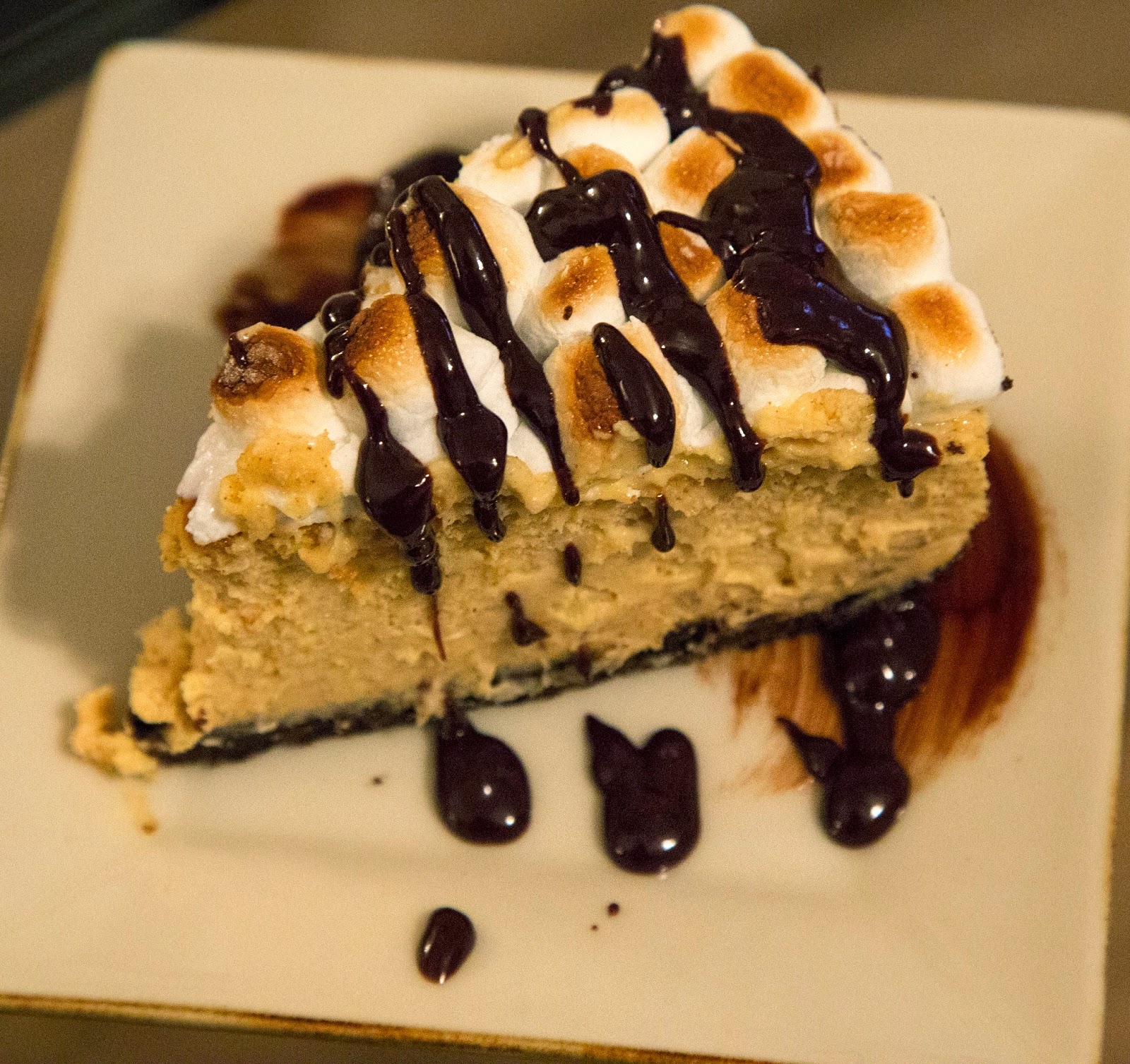 Last weekend was the first truly cold couple of days that we've had since last winter, which on one hand is really nice because I hate the cold. But on the other, I do miss those crisp fall days. In Richmond, autumn seems to last a week or two before we descend into winter, so we definitely like to take advantage. Which leads me to this dish: Sausage and Apple Risotto, which I found on a blog called Buttercup and Bourbon. I'm not sure if you could have a more "fall" dish. It's hearty and warm, and the addition of apple just takes me straight to autumn back home in Indiana. It could not be a more comforting meal. So get out a blanket, build a fire, and curl up in a chair with this dish.

I will say that if we made this again there are a few things we might change and I'm incorporating those changes into the recipe below. There didn't seem to be enough broth, and therefore the rice was still a little too al dente by the time we finished, so I've increased the amount. We also would prefer a little heat (shocker!) so next time I would use hot sausage instead of regular. 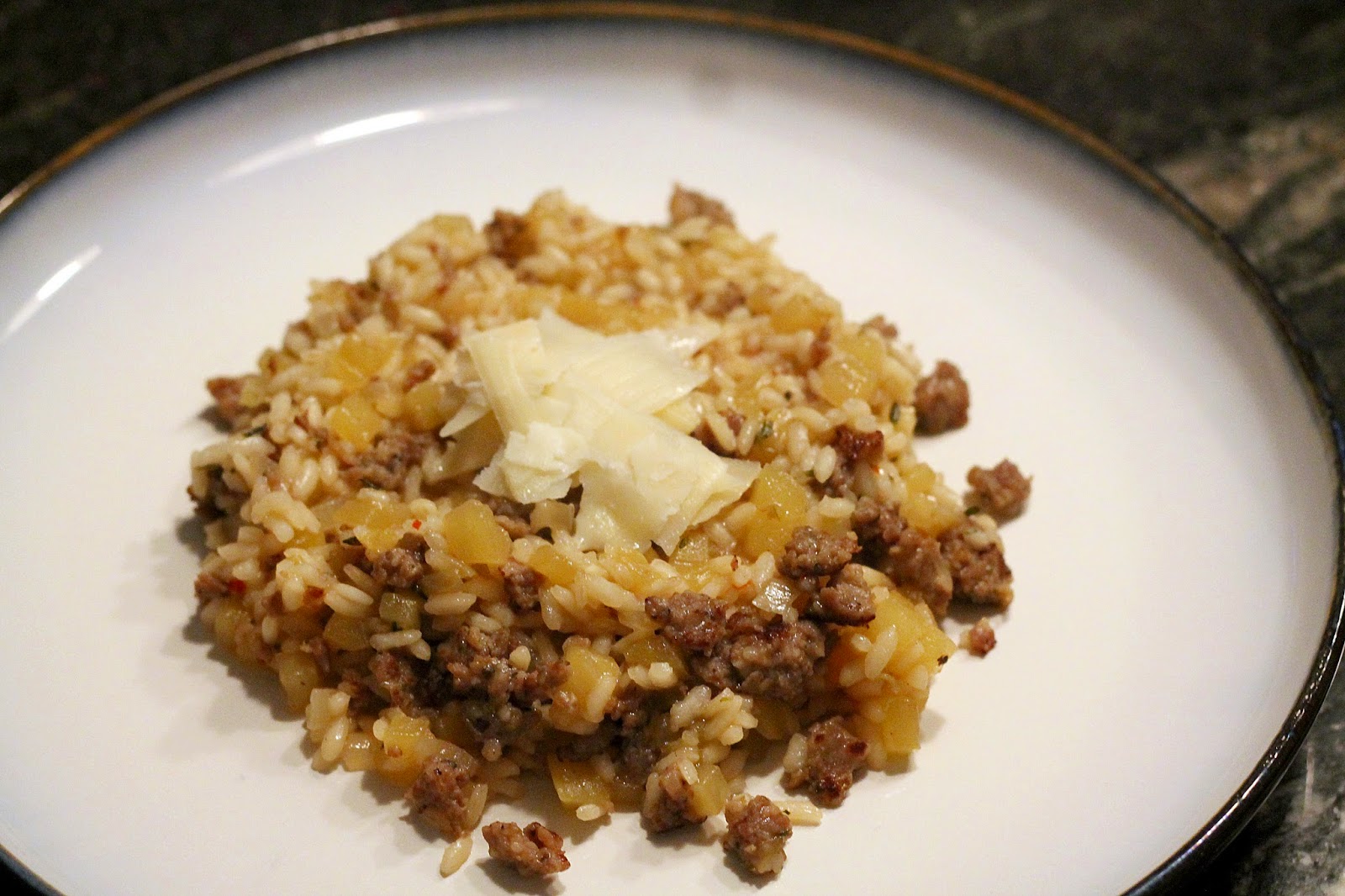 Start by heating your chicken broth and keeping it at a simmer. In another small saucepan, simmer the apple cider as well. In a large skillet, start cooking the sausage, breaking it apart as you go. Once it's just begun to brown, add in the onions and apples and cook for about 7 minutes, until the onions soften. Add in the rice and thyme, and toast for just a minute before adding in your first cup of broth. Stir until the liquid is absorbed before adding another half cup of broth. Keep adding the broth a half cup at a time, letting the rice absorb the liquid between additions. It should go quickly at first, and more slowly as you go on. Make sure to keep the heat medium so you aren't boiling away the liquid.

Once the broth has been incorporated, add in a half cup of the cider and let that soak in. Taste and if the rice is not yet where you like it (too al dente) add the rest of the cider and stir until it's absorbed. Season with salt and pepper (we didn't really need it since the sausage is salty). Serve and enjoy this little taste of fall!
Posted by Wormfood33 at 7:09 AM No comments:

The Hubs and I recently took a trip to Germany. To celebrate his upcoming 40th birthday, he really wanted to go to Oktoberfest (the real one), so we headed off to Munich! Now, I expected this leg of our trip to be more focused on the beer (or bier!) than on the food. And there was plenty, PLENTY, of beer. But I was surprised at how much I enjoyed the food, particularly one night when we ate at a biergarten called Augustiner-Keller. If you are ever in Munich, I highly recommend it. Anyway, since we've been back I've thought about German food in a new way, and that's what led me to try this recipe for Jägerspätzle. Well, that and how delicious the photo looked on this Savory Nothings blog where I found the recipe. Even though we have a pretty solid spätzle recipe (here's the link), we decided to give this new one a try. It made a lot more spätzle, but it didn't have the flavor that our other recipe had, and it was a bit chewy for me. But the mushroom sauce was really good. As always, I could have reduced it a little more to get the sauce a little thicker, but the flavor was nice and warming. Perfect for the cooler weather we've been having, and it definitely reminded me of our trip to Germany. 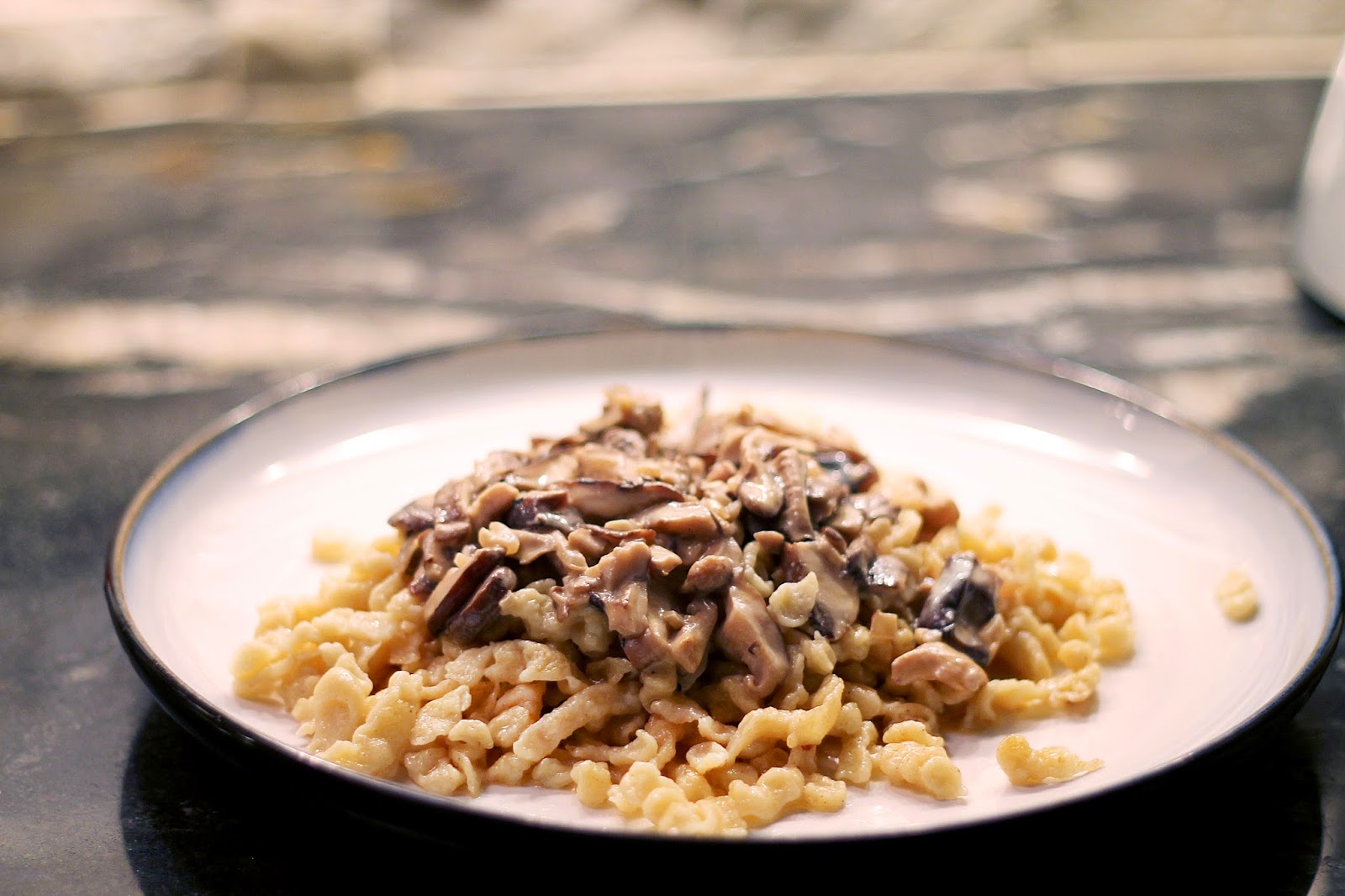 We started with the spätzle dough so that it could rest a bit while we started the sauce. Whisk together the water, milk and eggs first, then put the flour, then salt on top of the wet ingredients and use a spoon to gently mix the dry ingredients together a bit before mixing everything together. I personally added a little white pepper and a little nutmeg to the dough, and I felt they could use probably a half teaspoon more of salt. Use a wooden spoon to rapidly stir the dough until there are no more lumps and bubbles start to form. You'll also feel like your arm's about to fall off. Cover and let it rest for about 30 minutes.

Next you can start on your sauce. Melt three tablespoons of butter in a large skillet over medium high heat, then add the shallot and cook until it begins to brown. Then add in the mushrooms. Cook for about 7-9 minutes until the mushrooms begin to soften and get a little color, then deglaze with the white wine and reduce. Next pour in the broth and tomato paste and let it simmer until it becomes a thick sauce. I could have been a little more patient with this part, I believe. Finally, add in the last two tablespoons of butter and let them melt, then pour in the cream. Let the sauce warm back up, and it's ready to go.
To make the spätzle, get a large pot of salted water on to boil. We have a $7 spätzle maker that works awesomely and is so worth the money, but if you don't, just use a coarse grater. Gently use a spoon to help the dough fall through the grater into the water. It will fairly quickly float to the surface and it's done. Use a slotted spoon or a small mesh scoop to get them out. Melt a little butter in a skillet and lightly fry the spätzle for a few minutes until it gets a little bit of color, and then move to the plate. Top with the mushroom sauce, and enjoy a little taste of Germany.
Posted by Wormfood33 at 10:12 AM 2 comments: