Whenever my husband and I visit his hometown of Milwaukee, there is one thing that I really look forward to eating. And surprisingly, it’s not fried cheese curds. It’s a gyro. Seems strange, I know, but for some reason they’ve really mastered the gyro in Wisconsin. On the last trip, I had two in one day! So, I decided I should really learn to make my own so I don’t have to go all the way to Milwaukee to get a fix. I made it with chicken instead of lamb, though, so I guess I will still have to get the real deal whenever we’re in town.

I found this recipe on Tasty Kitchen’s blog and it’s pretty simple. I don’t normally like recipes that call for a specific spice mix (that’s not a recipe, that’s shopping) but I’ll make an exception for this one because the chicken turned out so tasty. And the tzatziki is fresh and delicious. My husband even threatened to eat it by the spoonful. 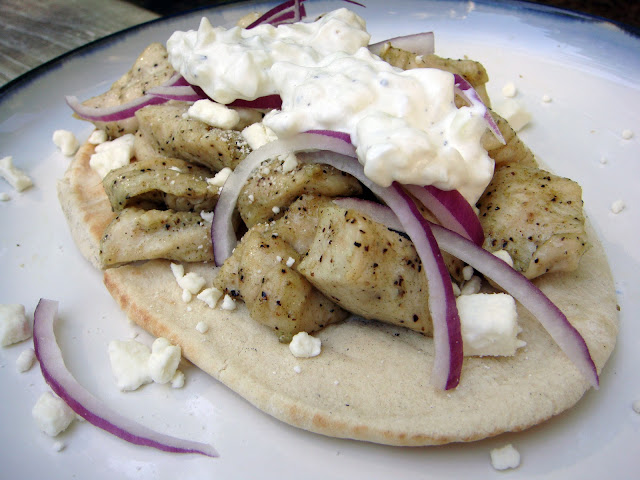 You want to marinate the chicken for a long time, so start it either the night before, or in the morning. Put the oil and the seasoning in a plastic baggie and make sure it’s well mixed. Cut the chicken into bite sized pieces and add them to the bag. Refrigerate until you’re ready to cook. We broiled ours for about 10-12 minutes.

For the tzatziki sauce, make sure to chop your cucumber and onion as small as you can (unless you prefer lumpy tzatziki). Then just mix all the ingredients together—voila! Tzatziki is easy, tasty, and it’s actually pretty healthy too. This recipe makes a ton of it, too. You can eat the leftovers with pita chips or just cut the recipe in half. 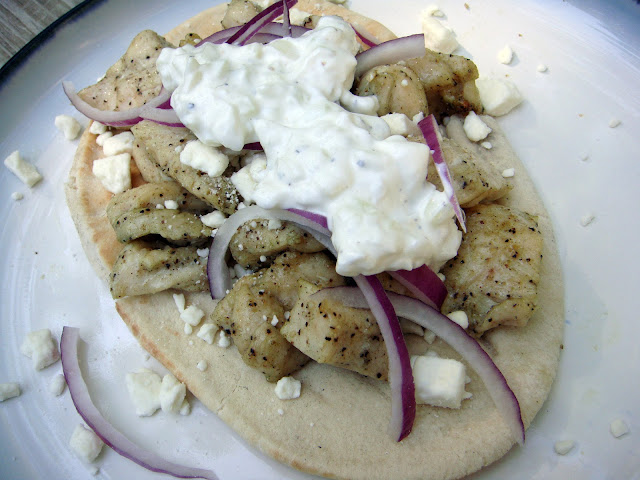 We served our chicken in pita pockets with a sprinkling of feta and red onion. I wish that I could find better quality pita bread, though. I recommend baking your own if you have the time and inclination (here’s a great recipe!).

(click here for printable recipe)
Posted by Wormfood33 at 8:32 AM No comments: 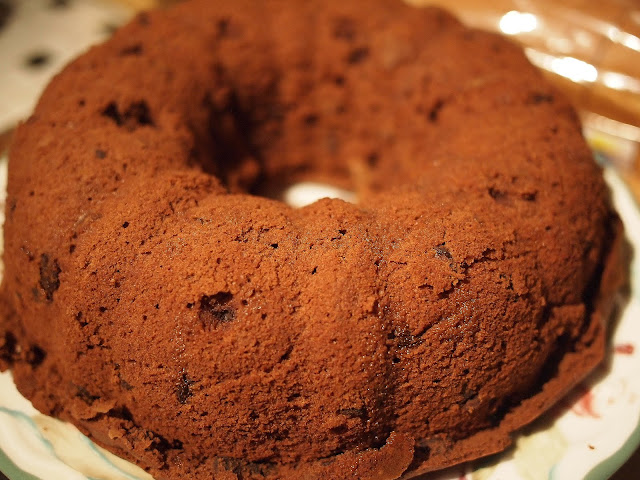 I made this for my co-worker's birthday. He's a big bourbon lover. To give you an idea of how good this cake is let me tell you the conversation my co-worker relayed to me that he had between him and his wife (he took the left-overs home): His wife: "You know I have a chocolate bourbon cake recipe." My co-worker: "You do?" His wife: "Yeah, but it only calls for 2 tbsp of bourbon. Do you know how much was in her recipe?" My co-worker: "She said a cup." His wife: "Well, no wonder hers is so much better!!" Now, I have to say that this isn't "my" recipe. I found it online from Simply Recipes. However, the blogger from that site said the recipe is from New York Times. So, there you have it. The cake was really good. And, I highly recommend it to all you bourbon lovers out there.

Now, take your standing mixer's bowl and add in the butter and stir for a couple minutes until it's light and fluffy. Add in the sugar and beat until well combined. Add in the eggs one at a time...stirring well after each addition. Next, beat in the vanilla, baking soda, and melted chocolate. Now, set your mixer's speed to low. Gently, pour in some of the whiskey mixture. Beat well. Then add in some of the flour. Keep alternating the whiskey mixture with the flour mixture until you end with the whiskey. Pour into your prepared bundt pan. Bake in the oven for about an hour or until a toothpick comes out clean when inserted into the cake. Once that happens, remove the cake from the oven and let cool for about an hour to so. Once cool, invert the bundt pan using a plate and it should come out easily. Sprinkle with some bourbon and/or powdered sugar. Enjoy!!

(click here for printable recipe)
Posted by Emily at 6:28 AM No comments:

Ok, so Iron Chef Chocolate was a long time ago. Like a really long time. I don’t know why I haven’t written up this recipe before now. Well, ok, that’s kind of a lie. I know why. Because although this amazingly decadent chocolate cheesecake was deliciously rich and chocolatey, and although it took home second place in the Iron Chef Chocolate competition, it’s kind of a pain to make.  It’s not that it’s so difficult. It’s just that there are a lot of steps. It’s definitely not a weeknight cheesecake. In fact, it needs to be refrigerated overnight so it’s not even a one day cheesecake. But the good news is that it’s highly impressive to look at, and even more impressive to taste. So if you want to show off a little, and you have a weekend to spare—this is your cheesecake. I found this recipe at Mel's Kitchen Cafe. 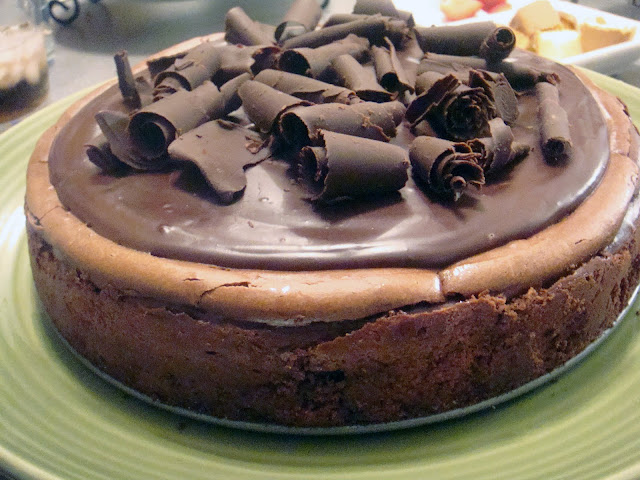 Put the chocolate graham crackers in a food processor until they are finely ground. Mix them in a bowl with the sugar. Pour in the melted butter and mix until it’s evenly combined. Butter a 9-inch springform pan and then press the crumbs in an even layer on the bottom only. Bake in a oven preheated to 350 degrees for 5 minutes, just until set. Let cool, but leave the oven on.

Start by melting chocolate in a double boiler or, if you’re like me, the microwave, until completely melted and smooth. Let it cool just a little so it’s not completely hot. In the meantime, blend cream cheese, sugar and cocoa powder until completely smooth and combined. Add the eggs one at a time and beat, then mix in the chocolate. Pour the filling over the crust. Now is the hard part. You want to bake until the center is just barely set. It’s kind of hard to tell when it’s done so just do your best. I sometime just tap the side and see how much it jiggles. Some people swear on putting a pan of water in the oven as well to keep it moist. I’ve never done it, but I don’t think it could hurt if you want to.
When it’s done, remove from the oven and let it cool ten minutes before running a knife around the sides to loosen. Let it cool completely before refrigerating it overnight.

Stir the cream, chocolate and sugar in a saucepan over low heat until smooth. Cool slightly before pouring over the center of the cheesecake. Spread it on top (within a half inch of the edge). This is great because it’ll cover any cracks you might have (don’t tell!). Chill for about one hour.

I used butter flavored Crisco because I had it around (it makes great chocolate chip cookies), but you can use unflavored as well. Put the chocolate and Crisco in a bowl and microwave for 30-45 seconds until the Crisco is melted. Using a fork, break up the chocolate and stir until it’s fully melted and combined. Use the back of a metal cookie sheet, and pour the chocolate on the back, spreading out into a very thin layer. Pop it in the freezer for a few minutes. You can tell if it is cold enough to make curls by touching it. If it leaves a big fingerprint, it’s not ready. If it only leaves a small imprint, you can start curling! With a metal spatula, scrape up the chocolate in long ribbons. It should automatically curl. If it breaks, then it’s too cold, so just wait 30 seconds before trying again. I found that I got the best curls when I moved the spatula in an arc, verses a straight line.
When you have enough curls, put them in a baggie and freeze until ready to serve.

To serve, release the springform pan and top with curls. It’s best to let it sit at room temperature for 1-2 hours before serving, to make it easier to slice. Speaking of slices... you'll want to keep them relatively small. This thing is hella decadent!