I had a tough time trying to decide what recipe to use for Iron Chef Ginger. I tried a different pork slider recipe that just wasn't good. I tried latkes, sauteed shrimp, and shrimp cakes with a ginger butter. I normally always go with a recipe that I've tried. Well, I decided to wing it this time, and went with Giada de Laurentiis' Sweet and Sour Pork Sliders . It had 5 stars on Food Network, so I figured it had to be tasty. My question was whether it would have enough ginger in it to tell it was there. Well, the slaw didn't call for ginger, so I added it in to the mixture. The marinade was very tasty. The ginger didn't hit you over the head, but I thought it was nicely subtle. This pork slider was very tasty, and I really recommend it. Thanks for voting this one the winner! Sometimes winging it pays off! 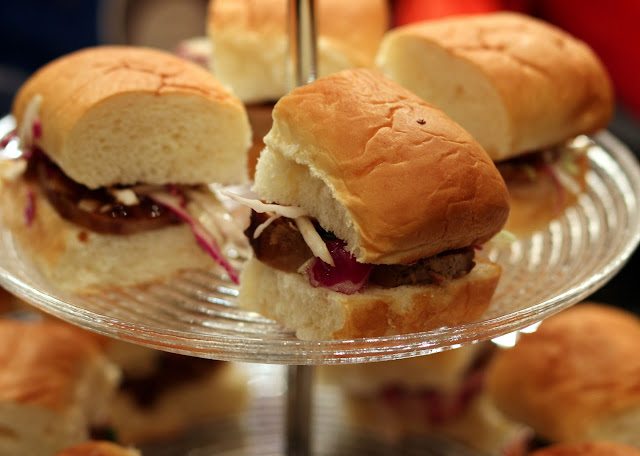 To make the slaw, combine all the ingredients above. Stir well, and place covered in the fridge while you prepare the pork. By the way, for the cabbage I just used pre-packaged cabbage that you can find in the veggie aisle.

For the pork; combine the orange juice thru the zest of an orange in a medium-sized bowl. Mix well. Pour the mixture into a ziplock bag, and add in the pork. Place in the fridge for an hour at the least or overnight at the most. I let it marinade for about 3 hours. Be sure to turn the pork over a couple times while it's marinating. Set your oven to preheat at 425. Take out the pork, and pour the marinade into a small saucepan. Place the pork on a baking sheet, and cook in the oven for 30 to 40 minutes or until the temperature reads 140 to 160 degrees. Next, cook the marinade over medium heat and add in the arrowroot to help thicken the sauce. If you don't have arrowroot, then use about a 1/4 cup of water and 2 to 3 tablespoons of corn starch. Mix and then pour into the marinade. Once the pork is ready, remove from the oven and let rest for a couple minutes. Cut into thin slices. Take your roll and cut in half. Add the pork to the bottom half of the roll, add some of the sauce, add the slaw, and top with top half of the roll. Serve warm or at room temperature. Enjoy!